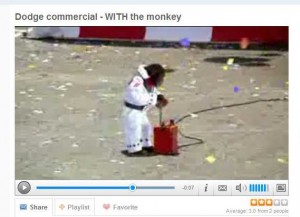 People for the Ethical Treatment of Animals has long been notorious for singleness of purpose but more so for many of its outlandish publicity stunts. Many of these inane stunts have gone a long way to hurt their credibility.

However, despite some of these goofy antics, many individuals and companies have given in to their demands rather than face any bad press. So it was refreshing to see their latest potshot at Dodge did a huge belly flop.

Dodge recently found itself in PETA’s crosshairs after the carmaker aired a commercial starring a monkey dressed up like Evel Knievel.  PETA screamed monkey abuse and demanded the commercial be pulled. But, unlike many who draw the ire of PETA, Dodge fought back in a most amusing way.

Enter the invisible monkey and a new creative and comical way to deal with our animal rights brethren who are wound a bit too tight.